The adventure begins! In the meeting mentioned in my last post, they suggested hitching free rides on planes by asking the attendants at the ticket counter for someone's ticket if they don't show up by the end of the check-in time.  Students have gotten free tickets in the past and since I didn't have a time limit like the Jailbreak students, meaning I could wait at the airport all day if necessary, I thought I had a pretty good shot at getting a free plane ticket.  They suggested trying this approach at smaller airports such as the Southampton airport.. convenient! So at about 6:00am on the morning of April 2, 2011, I set out for the Southampton airport which is a quick 30 minute walk from my residence hall.  The early start was for three main reasons: 1) I didn't sleep the night before because I was too excited, 2) There was a 7:10am flight I thought I might be able to catch to Nice, France which is in the general direction I was planning on, and 3) because Jailbreak didn't start until 9:00am that day and I wanted to beat them all there.  However, that didn't really matter because I soon found out that Flybe (the main airline out of Southampton) stopped doing that a couple years ago.  I chatted up a number of different people all progressively increasing in seniority for almost an hour until finally the manager called up headquarters and they gave a resounding NO.  So with that plan ruined, I made my way back towards to motorway intending to hitch to Portsmouth, which is the next city east of Southampton on the coast, and hitch a ride on a ferry to France.

This was my first time hitching anywhere, and I must admit that I was kinda nervous.  As it turns out, I had no reason to be.  I only had to wait about 5 minutes for a ride, during which I got a lot of funny looks and tons of pointing.. haven't people ever seen a hitchhiker before?, and to my surprise I got picked up by a guy in a porsche!.. I think.. I'm not that good with cars.  He worked with heating and air and was headed to the states on holiday in a couple weeks.  I asked which city, and he listed just about every big city in the US.  If my chosen profession doesn't work out, I'm seriously considering going into heating and air in the UK.. there seems to be a lot of money in it.  Anyway, I told him all about what I was doing and gave him the link to my blog, and he was kind enough to drop me off at the ferry port in Portsmouth even though it was a little out of his way (if you're reading this thanks for the ride!).  Again the people with Jailbreak said it would be easy to hitch rides on a ferry because they charge by car and not by person, so I figured all I needed to do was find someone who's car wasn't full and ask if I could be counted as a passenger in their car.  This was easier said than done.

First off, I went inside to check the times and prices of all the ferries.  Ferries to Caen and Cherbourg left relatively frequently through Britany Ferry, however these were about 45 pounds.  I asked the attendant if there was anyway I could just get a free ticket since I was hitching for a charity, and she said they sometimes do that but I would have had to arrange that before traveling... oh well, just thought I'd ask.  She then told me that if I wanted to hitch across, it was actually illegal to hitch inside the port and only 2 passengers were included with each car.  So not only was I going to have to figure out how to hitch a ride on the ferry without actually being in the port, I was going to have to find someone traveling across alone.  This seemed extremely hard so I decided I would just ask people for money instead.  There was a late ferry that left at 11:00pm with LD lines that was only 25 pounds which seemed like a doable amount especially since I had all day.  I then set out for the city center and started asking people on the street for money and explaining my situation.  I raised a grand total of 3.45 pounds after almost three house of hard work.  At this point I was exhausted having not slept the night before and having to carry around my heavy backpack.  I ended up taking an hour nap on one of the couches in the city museum (which was pretty lame but free) and stopped by Charles Dicken's birthplace on my way back to port. 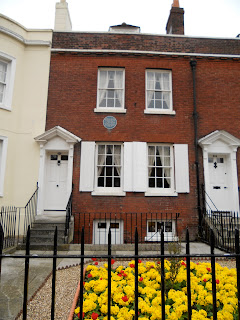 At the ferry port, I went ahead and bought a ticket for the night ferry and met some other charity hitchhikers from Swansea named Will and Flo who were on the same ferry as me and hitching to Morocco!  Since we had some time to kill, we headed to a pub for a few hours.  I'm going to take this time to recommend a drink that I think all three of us fell in love with.. Fireball cinnamon whiskey with apple juice.  It's like Christmas in a cup.. just try it.  We left the pub and decided to explore the town a bit; however, none of us wanted to carry our backpacks far.  Luckily we found a trolley (shopping carts for you Americans) right outside the pub!  All embarrassment aside we piled our backpacks inside and headed down to the waterfront shopping center and watched the sunset. 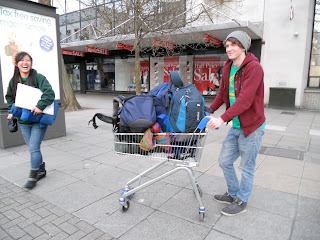 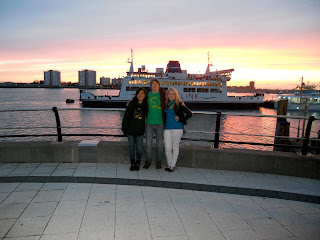 Back at the ferry port we met up with a bunch of other students from their university also heading to Morocco.  We all boarded the ferry and settled in for a long ride, 8 hours total which would put us in France at approximately 8:00am local time.  So I had been backpacking for less that 24 hours and I had already shattered my goal of not spending any money; perhaps it was a little ambitious.
Posted by Sammy at 12:57 1 comment:

Ok so this post is way overdue. For those of you who don't know, I am backpacking through Europe for the month of April during Easter holidays trying to raise awareness and money for the Rob Stewart Sharkwater Foundation dedicated to shark conservation (if you haven't seen his documentary.. you should). For any non marine biologists, here is a quick recap..

Shark have been on this planet since before dinosaurs and in approximately the last 100 years shark populations have decreased by 90% worldwide.  This is ridiculous.  One of the major causes of this has been the demand for shark fins to make shark fin soup in China and other parts of Asia.  Shark fin soup is a sign of wealth.  Basically if you can afford it, that means you have money.  The sad part is that the shark fins add absolutely no flavor to the soup at all.. just a weird texture.  Honestly, I have nothing against shark fin soup or any culture's traditions.. I have a problem with the way sharks are being fished to meet this demand.  Not only do fishermen use illegal forms of fishing such as long lining in order to catch as many sharks as possible, but they also only keep the fins and throw the rest of the shark back in the water (still alive) because the rest of the shark is not as valuable as the fins themselves so they don't want to take up space on the boat.  Watch this video, it summarizes what I'm saying really well.. http://www.youtube.com/watch?v=QFs78Y2yMgg&feature=fvst (copy and paste in another window).  It's disgusting and it makes me sick.  And then I had this idea..

One day I was sitting in my room and a few students came by and started talking about a university sponsored (University of Southampton) hitchhiking competition to raise money for HIVE, HIV Education.  Teams of two or three have 36 hours to get as far away from Southampton as possible without spending any money on travel.  My friend Sara and I went to the meeting and found out that they have had people get as far as Australia!!!  They even told us all the secrets to hitching free rides on buses, trains, ferries and even planes!  It seemed completely possible to at the very least make it to continental Europe.  I talked to one guy who hitched to eastern Germany in 36 hours and then hitched all the way back in 24 hours!  I immediately fell in love with this idea but I wanted to do it for a cause I am passionate about.. a.k.a. SHARKS!!!  And that's how this all started.  I am going to blog during my travels and if you feel like donating, just click on the handy dandy Donate button on the right side of the screen.  My goal is to not spend ANY money at all and raise money instead. ALL donations will go to Sharkwater.  Any size donation is welcome and keep checking back for updates!
Posted by Sammy at 09:46 No comments:

Donate to Save Sharks!